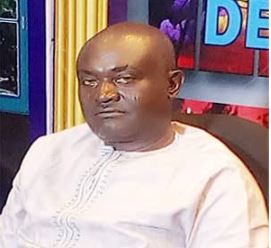 BY Wilson Macaulay
Warri
A chieftain of the Peoples Democratic Party (PDP) in Delta State, Hon. Francis Obule (JP) has appealed to the Delta State governor, His Excellency, Senator Dr. Ifeanyi Okowa not to listen to sycophants that want to sway him from his determination to develop all parts of the state and his plan to handover to acceptable and resourceful PDP candidate to continue from 2023.
Speaking to newsmen in Warri after a brief meeting with some politicalstakeholders, Hon. Obule said that Governor Okowa should ignore sycophants rather he should focus on his development strides in Delta State towards ushering in a new political dispensation come 2023.
He urged Governor Okowa to work with former Governor James Onanefe Ibori to bring out the best candidate among the aspirants, that showed interest amongst who are Olorogun David Edevbie, Chief Sheriff Oborevwori, Olorogun Kenneth Gbagi, Chief James Augoye, Chief Emmanuel Aguariavwodo, Chief Ejaife Odebala and others on the race.
Hon. Obule emphasized that it is important for  Delta Central 2023 (DC-23) to work harmoniously with the Urhobo Progress Union (UPU) to bring out the best among the aspirants who has the will-power and political acumen to wrestle power from any other aspirant that will emerge from the two other senatorial districts because united we stand divided, we fall.
He noted that some people are using Governor Okowa’s name as platform to campaign that Okowa loves one particular aspirant which he would give his support to, stressing that this was just a way to tarnish the reputation of Governor Okowa who loves all the aspirants as the same love he has for the State by spreading development across the three senatorial districts.
Comrade Obule specifically appealed to Governor Okowa to work closely with former Governor James Ibori who introduced the governorship rotation from one senatorial district to another for the minority to have a taste of power and sense of belonging in developing the state which kick started from Delta South with Governor Emmanuel Uduaghan after Ibori’s tenure and now Delta North with Governor Okowa who will handover to Delta Central  in line with the laid down political arrangement though not documented.
He suggested that Governor Okowa should have a round table discussion with James Ibori on ways to bring out credible candidate come 2023.
According to him “The unwritten andverbal arrangement for zoning system was not based on ethnic nationality but on senatorial district, therefore, the various aspirants that showcased themselves to the people of Delta State should be screened for the best to emerge to fly the flag of our great party, the PDP to secure the governorship position for Delta State come 2023.
Hon. Obule also appealed to all and sundry not to victimize Ibori for standing by the unwritten agreement of the zoning formula which has ushered different governors from other senatorial districts and this has shown the love Ibori have  for Delta State.
Comrade Obule who is also the Delta State Coordinator of PDP Mobilizer urged the DC-23 to engage in proper consultation and proper screening of all the aspirants and come out with acceptable candidate which will be presented to the PDP in Delta State.
Going down the memory lane, Obule said: “During the election between Professor Eric Opia of NRC and late Ighovodja of the SDP, when Urhobos of Delta Central  discovered that Ighovodja cannot match Prof. Opia they quickly advised him to
step down for Olorogun Felix Ibru which Ighovodja accepted.
The DC-23 and UPU should work harmoniously and come out with the best for us to have victory at the polls and all the aspirants should accept the recommendation of DC-23 and the
UPU” he concluded.
Tags
NEWS
Related Article