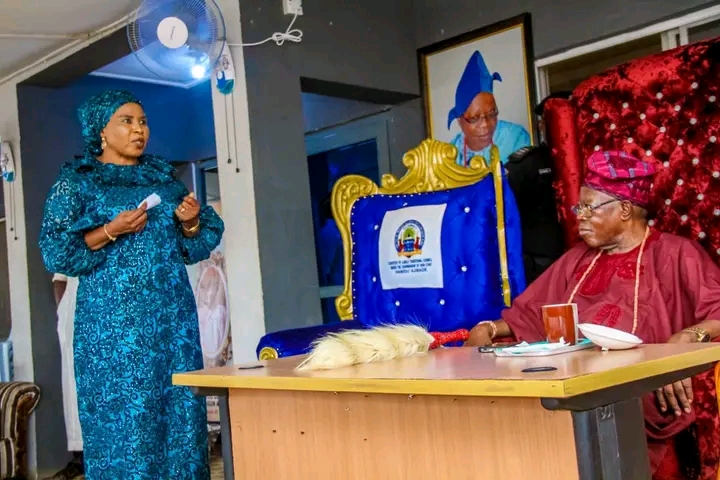 The 42nd Olubadan of Ibadanland,Imperial Majesty Oba Dr. Sen. Mohood Olalekan Ishola Balogun, has promised to play a fatherly role to corps members deployed to the state and the NYSC Scheme.
The Monarch gave the assurance during the courtesy visit to the palace by the NYSC Oyo State Coordinator, Mrs Grace Ogbuogebe.
He stated that having ascended the throne of his fathers that he will ensure that he builds on the legacies of his predecessors, thereby creating an enabling environment for corps members diligently serving their fatherland outside their states of origin.
The onetime Research fellow at Ahmadu Bello University Zaria, appreciated the intent of National Youth Serivce Corps which is to unify the nation since the end of the civil war, thus upholding the ideals of the founding fathers of the Scheme.
He lauded the services rendered by the Scheme through the corps members who ensure that they impact on their host communities.
Earlier in her brief, the NYSC Oyo State Coordinator Mrs Grace Ogbuogebe congratulated his Imperial Majesty for ascending the throne of his fathers, saying it is a well-deserved honour. Ogbuogebe in her remark intimated the traditional ruler of the various projects carried out by corps members to ensure the socio-economic development of the state.
She requested that the Monarch should lend a support to the Scheme to make NYSC Oyo a Pacesetter to all other NYSC formations.
She further attested to the success story of the Scheme since inception that the mandate of the founding fathers to unite this nation is being carried out with the activities of the scheme.
She however called upon the society to be the advocate of NYSC for greater achievements.
Tags
NEWS
Related Article