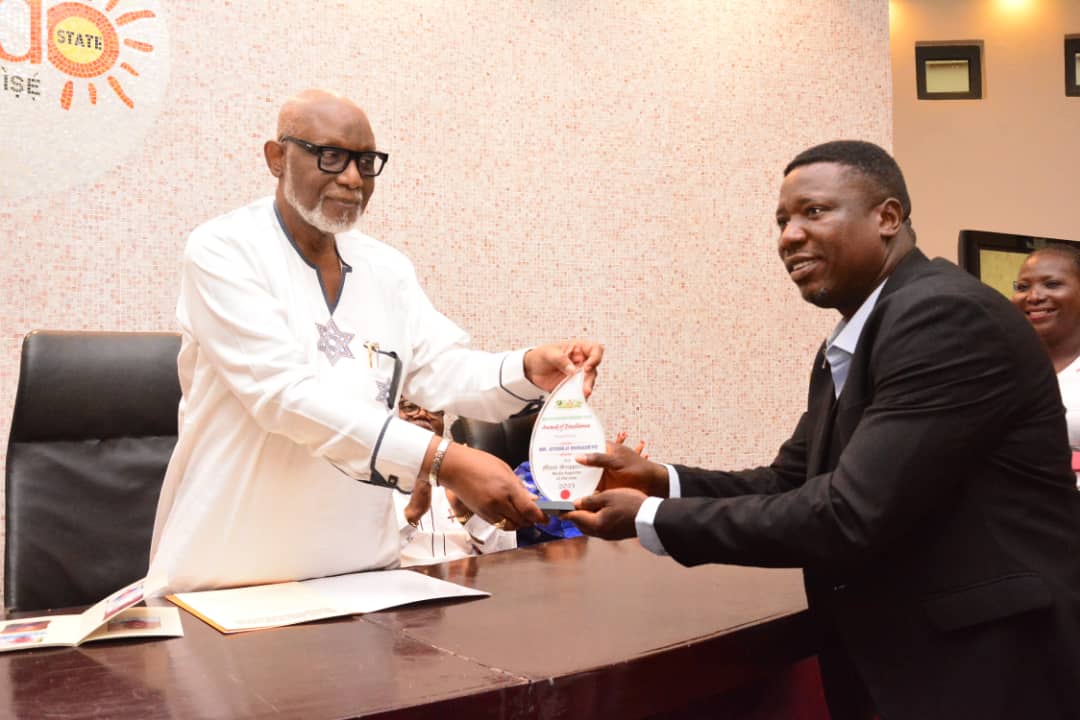 The Ondo State Government on Tuesday honoured the state Correspondent of TVC News, Mr Ayodeji Moradeyo, as the Most Supportive Media Reporter of the year, 2021.
Moradeyo, a Senior News Reporter received the award at the Cocoa Conference Hall of the Governor’s Office, Alagbaka Akure.
In a remark, the ondo state governor, Oluwarotimi Akeredolu congratulated Moradeyo and other awardees for distinguishing themselves in their choosen endeavours.
The Governor said: “There is need to move the agriculture sector to the next gear in order to compete with nations across the world. It is an incontrovertible fact that agriculture holds the future of Ondo State and my administration will continue to see it as a priority”.
Akeredolu also said he has directed that 350 personnel should be employed into the Ondo State Security Network Agency codenamed ‘Amotekun Corps’.
He noted that the crop of Amotekun Corps will be deployed to the forests and bushes to provide security for Farmers.
Akeredolu said more operational vehicles and motorcycles will be purchased to aid Amotekun operations in the state.
He said, ” We have agreed to employ 350 personnel into the Amotekun Corps in the state. Operational vehicles and motorcycles will be purchased too “, he said.
Earlier, the Senior Special Adviser to on Agriculture, Mr Akin Olotu, said the award was an initiative of the Ondo State Agribusiness Empowerment Centre (OSAEC) to deserving people who have distinguished themselves in their choosen endeavours.
Specifically, he described Moradeyo as a Journalist who has distinguished himself in propagating the activities of agribusiness in the State.
Responding, Mr Ayodeji Moradeyo, thanked the the state government and OSAEC for the special recognition.
He said: “This award, I must say, is a motivation and it would definitely spur me to do more. My continuous specialized reports in Agribusiness was motivated by my passion for Agriculture and Journalism”.
Tags
NEWS
Related Article