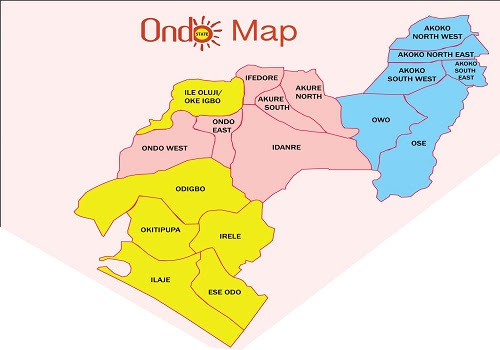 Commissioner for Education, Olufemi Agagu condoles with family of a CAC Grammar School student who Lost his life in Akure
The Ondo State Commissioner for Education, Science and Technology, Ondo State, Mr Olufemi Agagu, FNIVS, has condoled with the family of pastor Joshua Ojo over the death of their son, master Emmanuel Ojo, a JSS3 student of CAC Grammar School, Akure, the state capital.
The Commissioner, accompanied by the Permanent Secretary, Mrs Lola Amuda, and other officials of the ministry, urged the family to take solace in God, believing that Him alone knows the appointed time for every being on earth.
Mr. Agagu said the state government, particularly, the State Ministry of Education, Science and Technology, was really pained by the death of the student, Master Emmanuel Ojo, and urged the parents to accept the situation as the will of God at the moment, though painful.
The Commissioner also sympathized with the management and students of CAC Grammar School, Akure, and urged them to take consolation in God as the only giver and taker of life, emphasizing that there are occurrences that are beyond human comprehension.
The Principal of CAC Grammar School, Akure, Mrs. Oluwapelumi Adetimehin who was yet to recover from the shock, said the school community was saddened by the loss, despite efforts made by the school authority to save the life of the promising student.
Reports say the deceased, Master Emmanuel Ojo, aged 16, and in JSS3, was hale, hearty and bubbling with life when he resumed at school on Tuesday, but began to complain of headache shortly after the Principal’s Test.
He sat quietly among his classmates for a while until they began to play around and he attempted to jump through the window but hit his head against the post and landed on the bare floor also hitting his head on the concrete.
His colleagues raised the alarm that attracted the teachers and principal of the school who immediately rushed him the school clinic, but were advised to take him to the General Hospital after the initial treatment.
The school management immediately rushed him to the University of Medical Science Teaching Hospital, Akure, where he was pronounced dead on arrival.
His friends and colleagues described him as brilliant, reserved and easy going, saying they would greatly miss him.
The father of the deceased, a shepherd at CAC, Oke-Iyanu, High School area in Akure, Pastor Joshua Ojo, described the incident as a cruel blow of fate on the family, but said he could not query God why He allowed it to happen to him.
Olaoluwa Meshack
Head, Info. Unit
Ministry of Education, Science and Technology, Ondo State
12/01/2022
Tags
NEWS
Related Article